Connection to Absolutely True Diary of a Part-Time Indian 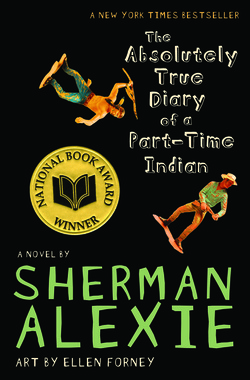 Alwyn Morris has a story very similar to the character Junior in the book Absolutely True Diary of a Part-Time Indian. Aside from the obvious fact that they're both Aboriginal, they share many qualities in their personalities.


Alwyn and Junior both knew they were capable of great things if they were given the chance. They each wanted bigger and better things than the average people surrounding them. Alwyn wanted to be an Olympian and Junior wanted to set himself apart from his poor reserve  and start fresh at a new, very unfamiliar school.

Although Alwyn did not necessarily grow up on a Native reserve like Junior did, he still grew up on Mohawk Territory in a Native community. In this community, Alwyn was not given all opportunities needed to fulfil his kayaking dream. He was being put down and wasn't given any encouragement to continue. In Juniors case, his local school didn't provide him with proper education and appropriate attention to make something out of himself. Junior was also constantly bullied by other students which made him consider himself an outsider.

Just like Junior, Alwyn switched his environment. He moved to British Columbia in search of better things and to further his training. Junior changed his environment by transferring to a school far from what he was used to. Junior made this transition to better his life and leave behind his bullies, as well as those brining him down.

Changing each of their surroundings was for the better. Alwyn got the training he needed, he also met his future Olympic partner. This training was what had let him gain the ability and skill to soon be a gold medallist. Junior change, however, may not have ended as spectacular, but it sure made a huge difference in his life. Junior made more friend, improved his education and became so much happier and stronger at his new school.

Overall, Alwyn Morris and Junior both hold inspiring stories. Putting forth the message of pursuing your dreams, to go ahead and do what's best for you and not giving up no matter what obstacles you may be faced with.