Journey to the Top! 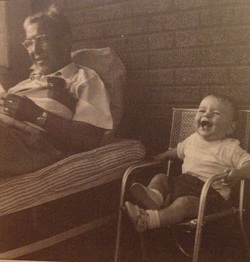 Alwyn Morris is a true Aboriginal hero and role model to Native kids all across Canada. He is the Winner of both a bronze and gold medal in kayaking, in which he rightfully earn after representing Canada in the 1984 Summer Olympics.

Alwyn Morris was born and raised in Kahnawake, located on Mohawk Tribe teritory, south of Montreal, Quebec. He grew up living under very strict rules that were strongly enforced. Alwyn had to earn his privileges and was disiplined for misbehaver.

The young athlete lived with his grandparents, who he moved in with to help his grandfather, Tom Morris, after he became very ill. Alwyn and his grandfather were very close. Tom was Alwyn's role model and his inspiration to one day be an Olympian.

Alwyn didn't always see himself kayaking professionally, in fact he grew up playing many different sports such as hockey, lacrosse and baseball. It was when a rowing club opened near his home that Alwyn took the first step towards his Olympic achievement. He fully dedicated himself to the sport even while he was repeatedly being told his effort wouldn't amount to anything. Alwyn believed he could be a champion, but more importantly, his grandfather did.

It was 1975 when Alwyn's hard work really started to pay off. He won the Canadian National Junior Championships, which led him to be invited to compete for a spot on the Canadian Olympic Team. Unfortunately, he did not make it, but the experience further motivated him to get the best training possible. The only way he could do that was to leave him home, friends and family and move to Burnaby, British Columbia. 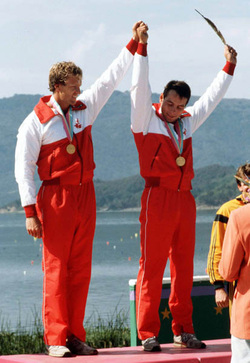 It was in Burnaby that he met his future Olympic partner, Hugh Fisher. It was also where he came face to face with a sign of true inspiration, a bald eagle. This eagle watched over all of Alwyn's practices and training courses from start to finish. One day, he even spoke to it in his Mohawk language, in which he and his team-mates believed the bird understood. Alwyn remembered this bird as a symbol of all his hard work, training and to remind him of where he starred and his journey to the top.

Before Alwyn got the chance to be a true Olympian, it was unfortunate that his grandfather, Tom Morris, his rock, his inspiration... has passed away. This tragedy did not slow him down, he and his partner pushed themselves harder than ever before.

It was Alwyn Morris and Hugh Fisher wearing red and white, representing the Canadian Kayaking Team  in the 1984 Summer Olympics. The final race for the Gold was against Germany. Germany was fierce competition and even took an early lead, but Alwyn and Hugh quickly caught up and took the lead. They both experienced the thrill of their life when they were the first team to cross the finish line.

It was a touching moment to all Canadians to see these 2 heroes standing on the top of the podium. It was even more moving when Alwyn held up the feather of the same eagle that watched over him throughout his training. He held the feather up high for all to see while he was being awarded his medal. This gesture brought respect to his Mohawk Tribe, culture and family by thousands.

Following his Olympic achievement, Alwyn continued to make a difference within and outside Native communities across Canada. He talked to many native kids as a part of the National Native Role Model Program to inspire them to follow their dreams. He also became the national spokesman for the Parents Resource Institute on Drug Education. He was also a 2-time winner of the Tom Longboat Award and was accepted into the Canadian Sports Hall of Fame. Additionally, he supports multiple foundations such as the Aboriginal Sports Circle and the Alwyn Morris Educational and Athletic Foundation. To this very day, he continues to support his tribe by being the Associate Director of the Mohawk Council of Chiefs and the Mohawk Council of Kahnawake.


Alwyn Morris is living proof that no matter how small you are, where you come from or what people say, you are capable of great things. With hard work and perseverance, you can make it to the top.